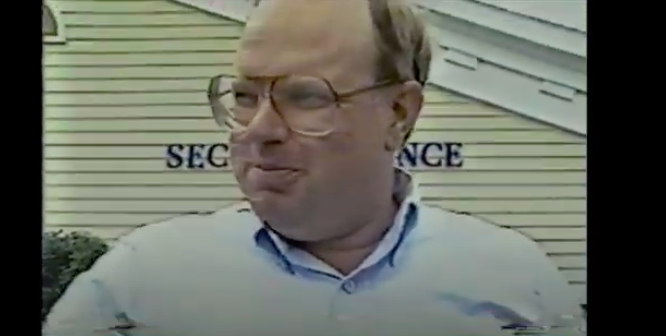 2nd Chance directed by Ramin Bahrani is a character-driven documentary about the rags to riches story of Richard Davis, the inventor of the modern-day bulletproof vest, who goes from former marine/pizza owner/delivery man in Detroit, Michigan, to the founder of Second Chance, a body armor manufacturing company in Walled Lake, Michigan where he becomes the largest employer and financially underwrites community events.  His idea of the modern bulletproof vest comes to him following a shootout with three armed robbers during a pizza delivery in an alleyway which is recreated and dramatized in the film.  Mr. Davis improves on the traditional chainmail armor and metal body vests by making them lighter, thinner and stronger, and demonstrates his proof of concept by shooting himself 192 times. Mr. Davis capitalizes on his idea and becomes very successful.  One of his purchases is a 600-acre property.

The documentary is not only about Mr. Davis’s rags to riches and comeback story but shines a light on American capitalism, the judicial system, the status quo, and the insanity of gun violence in America.  Bahrani reveals a complex portrait of a man whose personality resembles a Dr. Jekyll and Mr. Hyde stereotype struggling with good and evil.   Is he a do-gooder or a charlatan seeking the American dream at any cost?     Is he or isn’t he a bit of a sociopath?  The decision is yours to make.

Bahrani presents a multiplicity of viewpoints and shines a light on the myth and legend of Mr. Richard Davis.  Weighing in for Mr. Davis is Mr. Davis himself, mainly, and includes interviews with his two somewhat sympathetic ex-wives, Karen McCraney, the first Ex-wife, Board Member, Second Chance, and Kathleen Davis, 2nd Ex-wife, Barbara & Laura Schaffer, Home-sewers, Second Chance, Pat Crawford, Sister/Employee, Second Chance, Matt Davis, Son/Sales, 2nd Chance, Angela Watson, Save No. 700, Bruce McArthur, Gunsmith, Richard’s Close Friend, and Aaron Watson, one of his saves, who becomes a friend, an employee, and a sidekick to Mr. Davis’s filmmaking endeavors, but eventually turned whistleblower against him.  Weighing in against Mr. Davis includes Tim Paczesny, a Central Lake Resident, who was encouraged by Mr. Davis to take the fall for a bullet that had ricocheted from the pin shoot on Mr. Davis’s property and flew into the home of a neighbor causing her harm.   Mr. Davis was worried about the repercussions of becoming bankrupt and cooked up a plan involving Mr. Paczesny.  At the time, Mr. Paczesny was a 16-year-old high school student who was in trouble with the law for vandalizing his high school.  Mr. Paczesny went undercover and wore a wire.  The fallout was that Mr. Davis, who was charged with obstruction of justice, was able to plead down the charge to a misdemeanor, pay a fine, and avoid imprisonment.

David Zeman, Journalist, Detroit Free Press, also, weighs in challenging Mr. Davis’s account that he didn’t have insurance on his pizza shops when they went up in smoke when in fact, he did.  Bahrani challenges Mr. Davis about his origin story which drives the narrative of the film.  Did the shoot-out in the alley really happen? Can I have a copy of the police report, the filmmaker asks?  Bahrani finds a low-resolution report online but Mr. Davis doesn’t verify it.  Is it a fabrication?  Mr. Davis doesn’t comment.  Ed Bachner, Head of Research, Second Chance weighs in about the fiasco involving zylon bulletproof vests which, supposedly, at the time, zylon was considered to be a better material than kevlar but it turned out not to be the case.   Brenda McLees, a Former Employee, at Second Chance, didn’t like the vest and found that bullets went through it.  2nd Chance took away her keys and eventually, she was let go, and in spite of Mr. Davis’s reservations, the zylon vest went to market.  Mr. Davis’s concerns were put in writing and shared with the board but he was vetoed even though he held 51% of the votes.   There’s Jamie & Jakob Zeppetella, wife and son of officer Tony Zeppetella, whose Zylon bulletproof vest failed to protect him and who lost his life, weighing in.  Denying the charges about his zylon bulletproof vests, Mr. Davis tells us what he thinks really happened to the officer.  Mr. Zeppetella’s autopsy report contradicts Mr. Davis’s account.  Steve Kohn, Attorney for Aaron Westrick, Whistleblower, shares the Ford Motor Co. analogy to contextualize what had taken place. Ford was making and selling the Pinto car and knew that the location of the gas tank was a safety hazard.  They didn’t move it and people died.   Finally, we hear from Clifford Washington, Professor/Pastor, the man who shot Aaron Westrick, and was shot by Mr. Westrick in return, and according to Mr. Davis, was killed in another shootout.

Bahrani has woven many visual elements to create a compelling and riveting film where the American dream and want to do good by saving the lives of law enforcement individuals meets self-interest, narcissism, greed, and crime.   It is a well-crafted film making use of interstitial titles to structure the film, diverse film formats, editing techniques, first-person interviews, third-person interviews, stock TV footage, archival footage, still photographs, voice-over layered over images, day and night interior and exterior footage, and soundtrack.   Bahrani recreates Mr. Davis’s backstory, origin story, and former success by juxtaposing archival and stock footage against first person interviews of Mr. Davis against the multiplicity of viewpoints from the cast of characters.

The filmmaker strives for a balanced documentary and explores Mr. Davis’s origin story and the success of an American capitalist from the perspective of Mr. Davis who sticks to his guns regardless of the overwhelming evidential evidence from his detractors, investigative reporting, and the devastated Zeppetella family left without a husband and father because of a deficient product.  And come to think of it, it is Mr. Clifford Watson, himself, who was given a 2nd chance and was able to turn his life around all because Mr. Watson exercised restraint, shooting him in the legs, and sparing Mr. Watson’s life.

2nd Chance is an intimate portrait of a self-driven individual who flexed his brain and brawn to pursue his passion and the American dream within the larger context of American society where life, liberty, and the pursuit of happiness are enshrined in the American constitution and is an integral part of the fabric of American society, which makes America a great country.  Mr. Davis has survived his ordeals and is still standing in spite of his egregious actions and in the very spot where his origin story begins.  I wondered whether the origin story was really necessary for the pursuit of his American dream.    And why didn’t he listen to his better judgment and stop the zylon bulletproof vest from going to market?   What was he thinking?  What was the Second Chance board thinking?

The film resonated with me on many levels and has tremendous educational value serving as a vehicle to shed light on the insanity of gun violence in America.  The film at the very least makes a case for gun control.  When will the insanity stop?  Will America listen?  2nd Chance is deserving of your attention.  Don’t miss it.

Watch the trailer for 2nd Chance below

Online streaming for 2nd Chance is available for five days starting on May 3 at 9:00 AM.