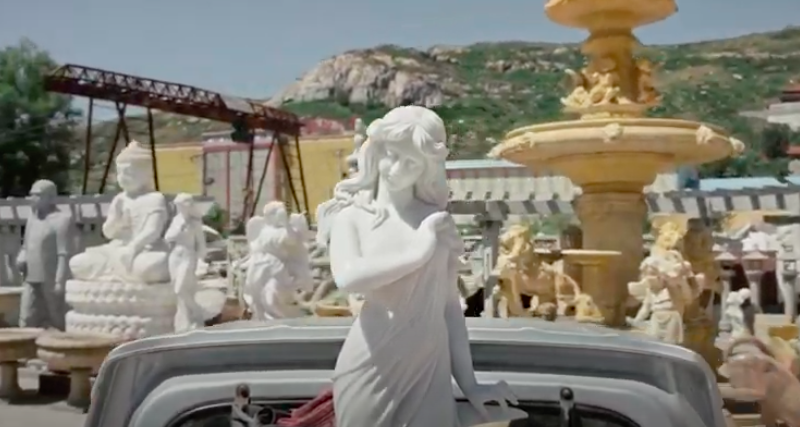 A Marble Travelogue, directed by Sean Wang, is a beautifully made meditative documentary about marble, a stone that is used for sculpture and building material. The multilingual film is subtitled.

The narrative of the story of marble begins in Greece where the marble is quarried in Didima “The Twins Town” in the Peloponnese.  It is transported to Piraeus, Athens for shipment to China, where the blocks of marble arrive and are unloaded in Quanzhou Port, China by the Taiwan Strait, and are then sent to The Chinese Capital of Carving, Qu Yang where it is manufactured into sculpture.  We meet Master Zhen, a National Crafts Artist, and learn that his production of works is restricted by environmental policy, and he is considering moving production somewhere else.   We then meet Laurent Sebban, a manufacturer of architectural tile, who moved his production to China some years ago because of inexpensive labor costs, and learn that China is still the go-to place for tile.   We drop in on a souvenir factory in Quanzhou, China where resin-marble, marble chips which are bonded with special resins to become a pre-cast material, are molded into Greek souvenirs.  Because of increasing labor costs, the traditional hand painting of the objects done by young women and children is being replaced by 3-D printers.   The souvenirs are offered for sale out of the Yiwu International Trade Market, Jinhua, China, and finally, exported to Greece for sale to the tourist market.  The Made in China, highly decorative, Greek souvenirs are available for sale in an outdoor market on the beautiful island of Santorini, Greece.

The documentary is a metaphor for the global economy, shining a light on the complexity of world trade and the intricacies of globalization but it is also about the beauty and aesthetics of objects crafted from marble stone and the feelings they evoke in the eye of the beholder, and the cross-fertilization of cultures.  In a bizarre twist of fate, Master Zhen encounters his own art sculpture on a trip to Rome near the Coliseum whose provenance is attributed to someone else.  When he talks about the lustrous Venus de Milo Statue, which is prominently displayed in the Louvre Museum, which he has studied extensively, I didn’t want him to stop.

Wang weaves together many visual elements to create a compelling and beautiful film.   The film opens with a close-up of the marble head and upper part of a female statue being lathered in a thick milky white viscous liquid and then cuts to wide-angle and aerial shots of Greece.

The filmmaker pays exquisite attention to the composition of his shots which are pleasing to the eye and resemble an album of picturesque postcards capturing the beauty of landscapes, seascapes, and cityscapes of Greece and China.   Aerial shots are juxtaposed against wide-angle shots and close-ups to capture space and place.  He juxtaposes the journey of the marble stone against the narrative and backstory of his cast of characters to illustrate the complexity of the global economy, (the port of Piraeus, Athens, Greece was purchased by the Chinese State Enterprise COSCO in 2016) and concludes with the statement that the Covid Pandemic is causing a swing in unilateralism and protectionism.  The film is a series of vignettes that beautifully transition into each other with the Mandarin-speaking Greek twins, Marianna and Sofia Erotokritou, giving the film structure and continuity.  They punctuate the beginning, middle, and end and travel back and forth between countries. They light up the screen with their beauty and charm and are a metaphor for the cross-fertilization occurring between Greek and Chinese cultural and economic relations.  Their family’s business facilitates immigration to Greece, and they carry the designation of Sino-Greece Cultural Exchange Ambassadors.

I tremendously enjoyed this documentary which left me with a wanderlust hankering to get on a plane and go somewhere to immerse myself in the landscapes, seascapes, and cityscapes of my destination.  This documentary is deserving of your attention shining a light on globalization and connections far and wide transcending cultures as seen through the journey of the marble stone.  Don’t miss it.

Watch the trailer for A Marble Travelogue below

A Marble Travelogue will be at Hot Docs 2022

Online streaming for The Marble Travelogue is available for five days starting on May 2 at 9:00 AM.