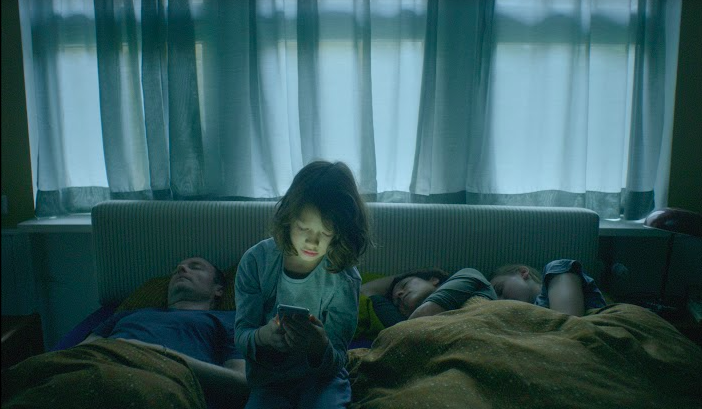 Human Factors directed by Ronny Trocker is a dramatic thriller.  The bilingual French and German film are subtitled in English.

The Peeters family, consisting of two conjugal parents and two children, one female teenager, and one young male child with a pet rat called Zorro, arrives at the family’s seaside home in France to spend the weekend.   They settle in, the children relax in front of the TV.  Jan asks if anyone has seen his personal phone.   Jan takes the TV remote and changes the TV programming that the kids were watching to tune into the evening news.  Jan and Nina put away the groceries.   Jan makes the decision to go to the grocery store to pick up some needed items.  He leaves.  He walks to the grocery store.  He picks up some grocery items and returns to standing outside the exterior wall fence of the home speaking on the phone when he hears voices coming from the house.  He pauses and listens carefully, and then continues his phone conversation.  He finds the front door locked.  He taps on the window and knocks on the door when Emma answers.  He learns there was a break-in.  Nina has a bloody nose.  Max is upset because Zorro has gone missing.  He comforts Max.   Nina and Jan meet with the police.  Nina gives her statement. Nina is unable to describe the intruders whether they are French, Flemish or Foreign. The police officer fumbles her statement. She heard something but was unable to say what it was.  Nothing was taken apart from Zorro.   Jan wonders if the break-in has something to do with their work.  Nina asks Jan to check the garden before they retire for the night.  He reluctantly agrees.  He checks the garden, hears something, picks up a stick, and whacks some bushes.  Nina with a flashlight in her hand asks Jan “what are you doing?”.  The family spends the night together sleeping in the same bed.  Jan tells them they are going home the next day.  Emma objects as she has a date with Amelie as does Max who is worried that Zorro will return and he won’t be there to greet him.  This is Jan’s point of view of the event.

The director employs the Rashomon Effect with a twist on the narrative to give contradictory interpretations and descriptions by Jan, Nina, Emma, and Max Peeters, and Max’s pet rat Zorro about the break-in providing different perspectives and points of view on how it was individually experienced and perceived.   Following Jan’s experience of the event, it loops to Max and his experience of what transpired then to Emma, and Nina, and finally, Zorro, the pet rat.   The Rashomon Effect reveals a family coming undone at the seams. 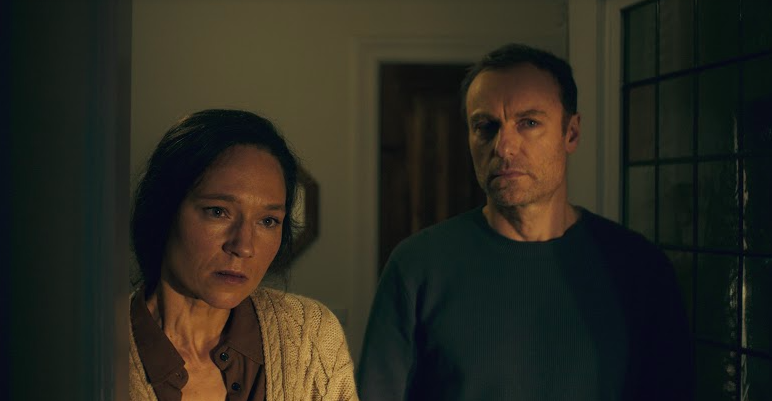 It’s a compelling and riveting film made up of a stellar cast of actors who give commanding performances.  Waschke bristles with toxic male masculinity with exaggerated male traits, and seething anger, expecting his family to fall in line with his decisions.   Yet, he does sign Emma’s school note about her truancy and asks Emma to share it with her mother.   Timoteo gives a nuanced, complex, and multi-faceted portrayal of the undermined wife and the aggrieved business partner sizzling with rage who no longer recognizes her husband and business partner.   Jan goes to great lengths to convince Nina that she imagined the intruders reconstructing another narrative and demonstrating how she might have imagined it.   Jan dismisses Max who announces that he saw daddy hiding in the garden when it happened which was a good thing.    He tells Max to stop it.   Jan admits he was on the phone.  How can a parent deny a child’s innocence and naivete?   Nina sees through Jan’s lies and deceit.  When do we take calls in private, she asks?  Kube is amazing to watch as the happy-go-lucky kid with a will of steel who speaks his mind and sticks to his guns.  He won’t be ignored.  He does take his dad’s personal phone but gives it back to him the next day.  The burial of his pet rat Zorro which he finds in the garden is done with dignitas and gravitas, and is beautifully shot.   What’s eating Emma?  Hermann plays her superbly – the troubled teen dealing with existential angst.   Why is she missing so much school?  Does she randomly kiss boys at parties? 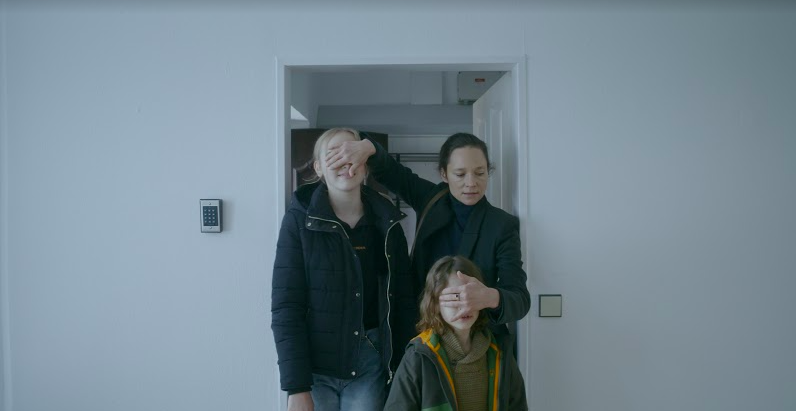 There is much to recommend this film. It’s beautifully shot and the director makes use of the foreground, middle ground, and background to add depth and dimension to his images.  He employs innovative camera movements and film techniques.  There’s a scene of Max rowing.  His upper back is in the camera’s frame of reference. As he moves backward, his upper body fills the camera frame turning the screen image black.  The video footage from Max’s helicopter gives another point of view to the story.   The director has stitched together many visual elements to create a riveting dramatic thriller where the nuclear family and the sake of appearances meet misery, disappointment, and change.   If you are fond of dramatic thrillers, you will gobble it up.  If you’re fond of European movies which have personal relationships front and center of the narrative, you’ll definitely enjoy this film with its compelling performances, superb dialogue, and high production values.    Don’t miss it.

Watch the trailer for Human Factors below

Dark Star Pictures releases Sundance film Human Factors on May 6 (L.A Theatrical) and on Digital on May 24, 2022