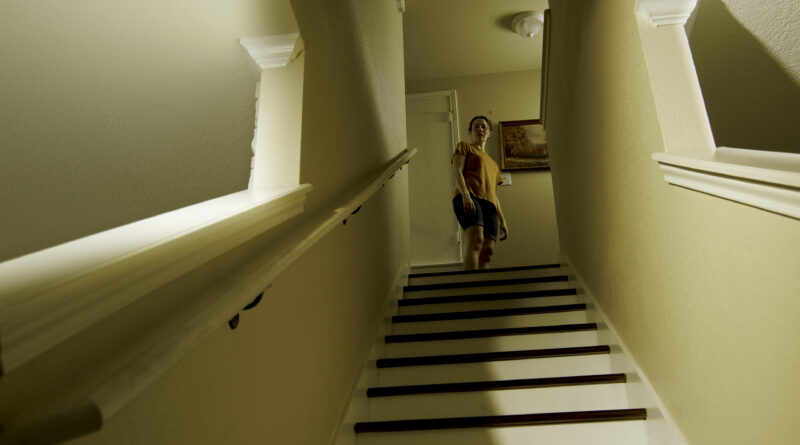 TRIP, directed by Neil Alexander McCay, is a psychological horror film, where the death of a child by suicide meets existential angst and the battle between good and evil.

Ally’s overwhelming and crippling grief and self-destruction, overindulging on booze, and popping pills, over the sudden and horrific suicide of her beloved daughter Sam is juxtaposed against the narrative of Sam’s suicide and the unorthodox intervention and treatment by psychologist Jan Rollins, and set against her tenuous relationship with her husband Michael.   The narrative of the film takes place within the confines of the family home which Ally can’t leave.

Jan Rollins shows up at her house unannounced and offers Ally the chance to see her daughter again and find out why she did it.    Ally would need to drink a tea brewed with the hallucinatory flowers, Datura stramonium, and be guided by Jan.   Ally, herself a therapist, is skeptical.  She considers dumping the tea down the drain but stops herself and takes a sip which sends her down a dark and slippery path.  She goes through Sam’s sketchbook and discovers disturbing images.  She asks her husband if he believes in ghosts, and tells him she is seeing a therapist at no cost.  Michael tells her that they can’t afford the therapy, that Sam is gone and that’s it, and to go outside. 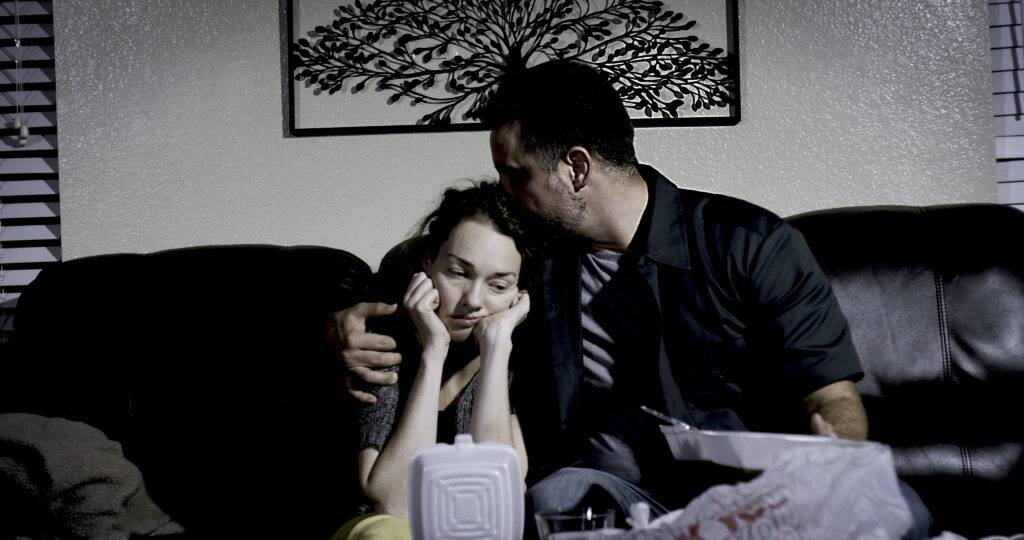 Spooked, when she sees a masked figure in the backyard looking back at her, she tells her husband.  He doesn’t see anything, and says, “that’s what’s going to take us to hell”.  She questions what he has just said, and he denies saying it.  She tells him she just imagined Sam going down the stairs and going outside into the backyard, and not calling the police.  She tells Jan that she took a sip of the brewed tea.  She tells Jan about the masked figure.  Jan explores Ally’s feelings.  Ally tells her that she can’t leave the house.  She is scared and can’t breathe when she does.  She tells Jan that on the day her daughter died she saw a face, and she herself is seeing the same things in Sam’s sketches.  The plot thickens and everything becomes more intense and unreal.  She sees a boy with a red scarf covering his mouth in Sam’s room.  When she pulls down his red scarf, she sees he has no mouth.  He disappears in the closet and sees the words ‘Give Me Your Voice’ carved on the inside wall of the closet.  Jan explores Ally’s relationship with her husband Michael, suggesting perhaps, he is having an affair, and Ally tells her to blow it out her ass, a nice bit of sarcastic humor.  Jan tells Ally about the malevolent shapeshifting spirit(s) from Botswana, the obosu, where she was a missionary.  It’s the embodiment of insanity and has no eyes.  It steals the eyes of its victim to look into their soul to destroy them.  The obosu are parasitic, she tells Ally.  It’s just a story and Sam’s drawings of figures with no eyes are a wild coincidence to explain the unexplainable, Jan says.  How is Ally to make sense of what’s happening to her?  She is overwhelmed. 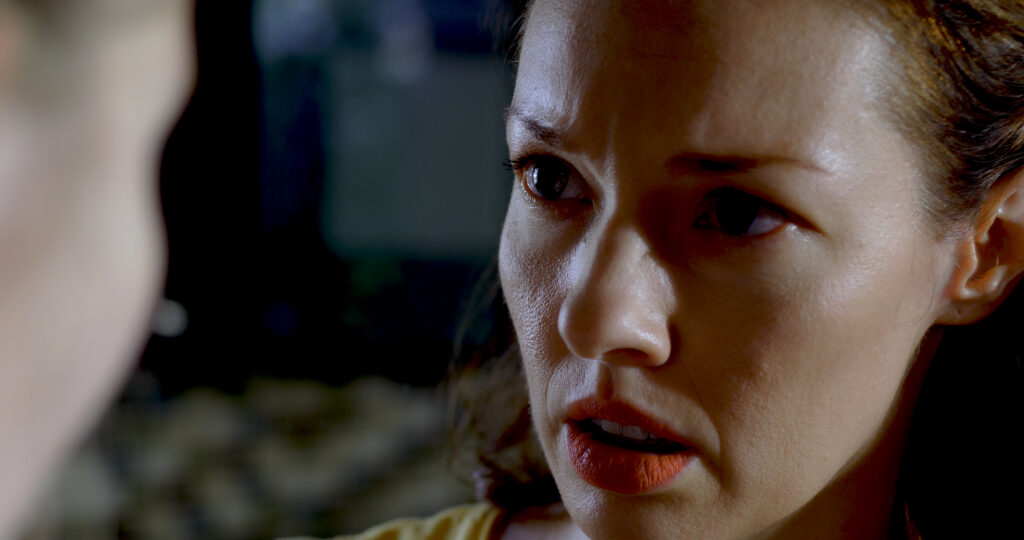 Jan tells Ally that Sam is trying to show her something.  Ally tells Jan she is still drinking the tea, and about the boy with no mouth that she saw in Sam’s sketchbook.   Jan tells Ally to stop drinking the tea.  Michael wants another child but Ally doesn’t.  Ally sees Sam’s dead body come to life in the bathtub.  She tells herself this isn’t real.  She looks again and there is no Sam.   The real and the unreal as perceived by Ally are juxtaposed in the film which leaves you guessing and questioning Ally’s perception, understanding, and cognition.    Is Ally hallucinating?   Ally turns away from the horror.  When she turns back and looks again, Sam isn’t there. The plot thickens and heats up.  Ally attempts to harm herself.  The boy with the red scarf reappears.  Ally imagines Sam.  Sam becomes violent towards her and demands her eyes and hands her the dagger.  Ally collapses.  Dr. Harris tells Ally to stop drinking the tea.   Why would she drink poison from a complete stranger?  She sees a double image of Dr. Harris, one of him talking to her husband and the other gouging his eye with the dagger.  She discovers there is no Jan Rollins.  Jan wasn’t referred to by her colleague.  Michael becomes possessed.  Everything is flipped on its head.  What is Ally to believe, and what is she to do? If you want to find out what happens to Ally, Michael, Jan Rollins, and the boy with the red scarf, then, you’ve got to see the film. 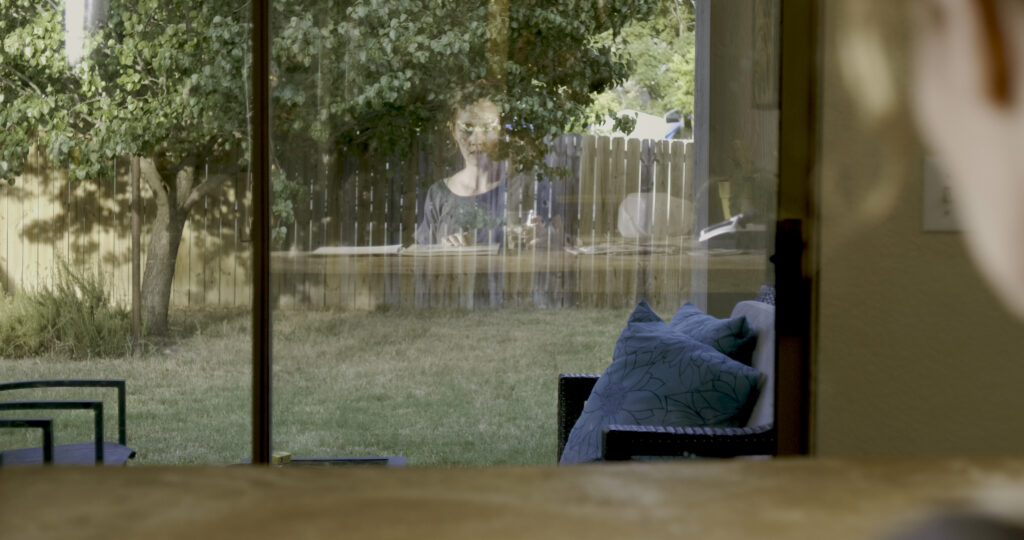 Villalobos gives a stellar performance of the grieving mother caught up in a nightmarish battle of malevolent spirits hell-bent on destroying her and her family.   Her nuanced performance as the aggrieved woman who ‘hell hath no fury like a woman scorned’ is riveting.  Schott’s portrayal of the unrelenting and obsessive-compulsive psychologist who weasels her way in Ally’s life to manipulate and confuse her is disturbingly good.  Her eyes are mesmerizing, and her acting is captivating and enticing.  I would be easily fooled by her if she knocked on my door.  Many would be, I think.   She’s that good.  Like any good horror film, scenes where Ally battles the malevolent shapeshifter are terrifyingly good and blood curdling, and the soundtrack helps set the tone for the film.  TRIP is a provocative and intriguing film.  Fans of the psychological horror genre will gobble it up.   Don’t miss it.

Watch the Trailer for Trip below!