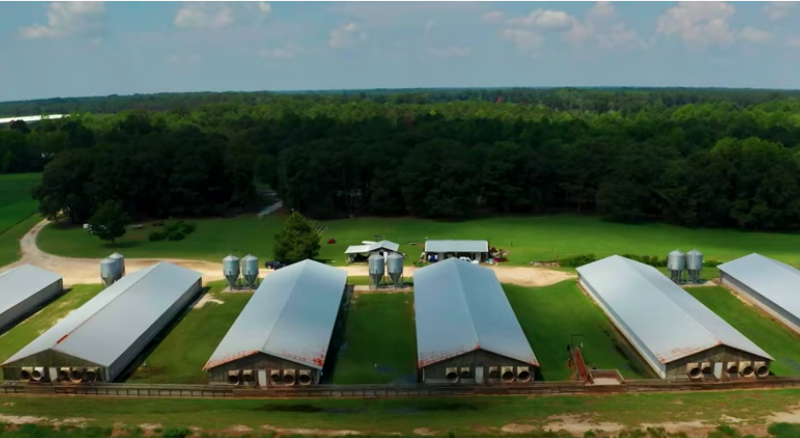 The Smell of Money (2022), directed by Shawn Bannon, is a powerful documentary that shines a light on CAFOs (Concentrated Animal Feeding Operations) in the Eastern District Counties of North Carolina more specifically the hog industry which is adversely impacting the quality of life of local residents and their communities, mostly African-Americans, contributing to air and noise pollution and severely impacting the environment.  It is a film where unchecked greed and influence meet outrage, misery, exploitation, and class action lawsuits.

Bannon presents a multiplicity of viewpoints and shines a light on how the agricultural food industry has been allowed to flourish specifically in the Eastern District Counties of North Carolina, where their unfettered growth, over the last 25 to 30 years, has left local citizens outraged and has severely impacted their quality of life and communities.  The state of North Carolina is one of the only states where it is legal for industrial hog farms to spray untreated hog waste onto their fields.  The hogs which are housed in industrial barns live on slatted flooring which allows their feces and urine to flow through the gaps in the floorboards and which is eventually pumped into uncovered lagoons near the industrial barns.   The size of these lagoons can be as large as a football field and when they are full the excess is sprayed over their fields which are abutting local farms and communities.  The smell from the lagoons and droplets from the spray travel far and wide adversely impacting those living nearby.   Bannon uses aerial shots juxtaposed against wide-angle shots to visually show the scale and size of CAFOs and their lagoons.

Bannon juxtaposes the two opposing sides of the hog industry to strike a balance of opinions and to demonstrate what’s at stake.  Experts who weigh in for the plaintiffs include Larry Baldwin and Rick Dove of the Waterkeeper Alliance,  U.S. Senator Cory Booker from New Jersey, Courtney Woods, Ph.D., UNC School of Public Health, the testimony of Steve Wing, Ph.D., UNC School of Public Health, Naeema Muhammad, North Carolina Environmental Justice Network, Mona Lisa Wallace, Attorney for communities suing Smithfield, and Lewis of Lewis’s Barberia Shop.   Plaintiffs who weigh-in and are part of the class action lawsuits include Elsie Herring, Don and Susan Webb, and Rene Miller.  Tom Butler, North Carolina Hog Farmer, from Harnett County, a neutral witness, weighs in sharing his expertise and knowledge of pig farming.  The opinions of the opposing side include Steve Troxler, Commissioner of Agriculture, Thom Tills, US Senator from North Carolina, and Wendell Murphy, billionaire pig farmer which is taken from stock TV footage.   If you want to find out what happens to the class action suits, well, you are going to have to see this compelling documentary.

The documentary has many layers which give it depth and complexity raising important social issues.  An underlying narrative of the film situates the mistreatment of African-Americans by CAFOs within the framework of environmental racism.  If white affluent communities were adversely impacted, would CAFOs get away with it?  I doubt it.   It challenges big agriculture and the consumer, but, more specifically, the consumer who has a role to play in addressing this social injustice.  Would you be willing to change the narrative by cutting back or giving up on meat consumption which would have an effect on demand and change the dynamics of big agriculture?  Is it worth considering?  You be the judge…  Personally, Mr. Butler’s comments about pigs resonated with me when he commented on their intelligence.  If you consider them sentient beings, stop eating them, and stop the slaughter.

The Smell of Money is a fascinating and compelling documentary deserving of your attention shining a light on the shameful practices of big agriculture and how it grows our food which is contributing to ecological disaster and adversely impacting local residents and communities.  If you want to understand what’s going on with CAFOs and big agriculture, then The Smell of Money will serve as an excellent primer.

Watch the trailer for The Smell of Money below

Online streaming for The Smell of Money is available for five days starting on May 1 at 9:00 AM.