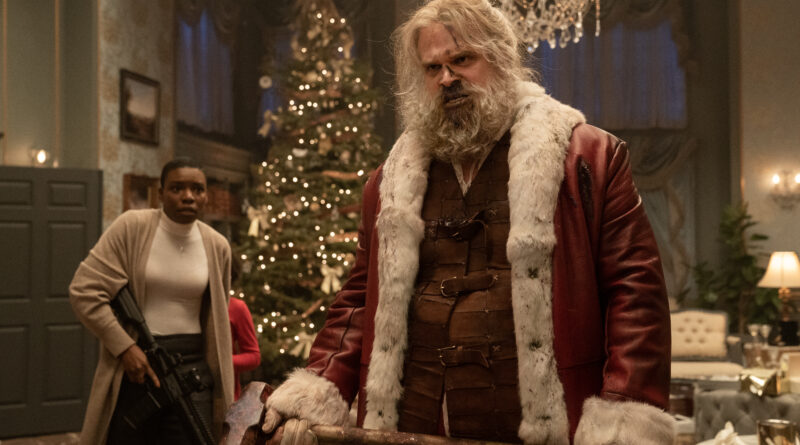 This year, Christmas couldn’t be stranger for young Trudy Lightstone (Leah Brady) who recently witnessed her parent’s separation. Despite their differences, the three of them reunite to spend Christmas Eve as a family at the Lightstone’s billion dollar estate in the-middle-of-nowhere America. After an awkward yet hilarious introduction to the extended members of the family, the evening takes a turn once armed mercenaries break into the mansion for more than milk and cookies. Legendary John Leguizamo leads the robbers under the code name “Mr. Scrooge” and as his name should suggest, he’s determined to ruin this Christmas—and to steal the millions of dollars locked in a safe downstairs. Fortunately the Lightstones are not only rich, but also #blessed. As the intruders begin shooting up the mansion, the sound of bullets wakes Santa Claus (David Harbour), who’d passed out upstairs while drunkenly delivering a present for Trudy.

Harbour shines in a role he was destined for, delivering the most realistic and chewable rendition of Santa we’ve seen on screen in years. His subtle but electric performance as Papa Noel acts as the bloody beating heart of this film. When we first meet Santa, he’s drunk and defeated. Decades of commercialism, consumerism and materialism sinisterly stealing the spirit out of Christmas has pushed Santa to forget why he put on the red suit in the first place. A world dominated by greed has even caused Santa to lose faith in Christmas and its true purpose to the world. He pops in and out of homes across the world on Christmas Eve… chimney after chimney… cookie after cookie… until he arrives at the Lightstone Estate, finding a massage chair—and a hundred year old bottle of brown—passing out mid-vibrations, cookies still in hand. The shocking sound of bullets wakes him up from his nap and soon Santa has no choice but to deliver some season’s beatings to the baddies on his naughty list downstairs. 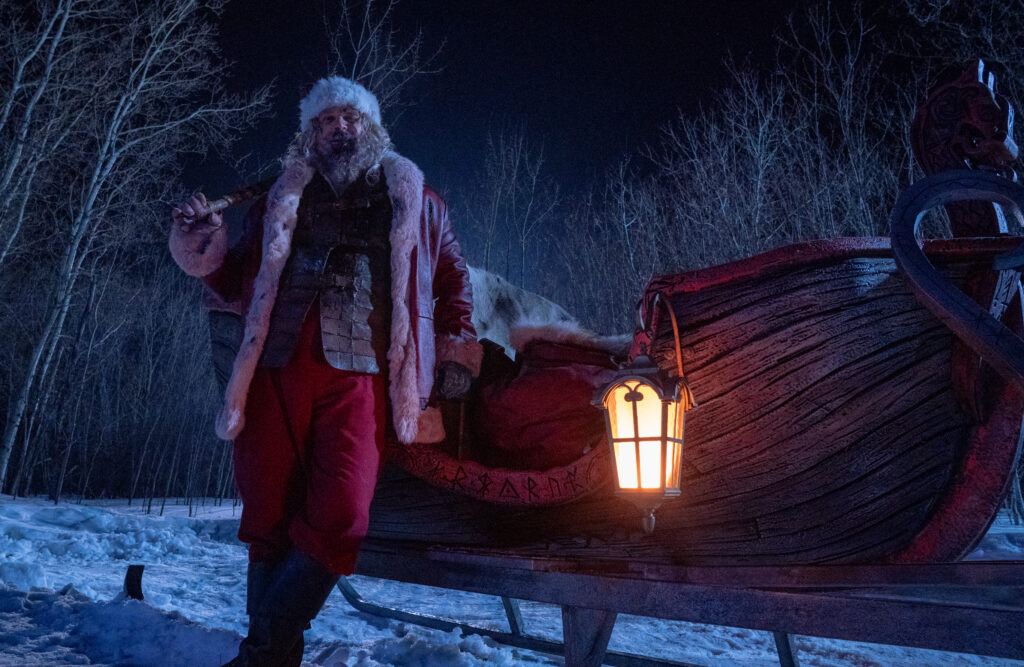 Santa is decking more than just the halls this Christmas. Violent Night is a hilariously vulgar and bloody good time, stuffed like a stocking with spirit and joy. This movie is warm at its center and a jolly combination of Home Alone, Bad Santa and Die Hard. You will be laughing all the way during this movie, which can be described as a Christmas cronut: hard on the outside, soft on the inside. Oh, and it’s covered in blood!

Although some lulls in the first half may contribute to the film’s slow start, Violent Night dominates your attention and satiates your appetite for entertainment once it kicks into overdrive heading into its second half. The film seamlessly blends multiple genres throughout its runtime, making it more than just a bloody action comedy. This film brandishes a slasher-level of blood and violence and yet due to its cheeky score and spirited frontman, the brutal kills in Violent Night will have you laughing and cheering for more. Tommy Wirkola embraces the film’s violent elements and weaves them effortlessly into a vulgar comedy that makes this film stand apart from other adult Christmas movies. This direct contrast is endlessly entertaining and is what characterizes the film, as its most captivating scenes are when Santa is butchering bad guys to our favorite Christmas carols. There could be more action throughout its first half, but when we do see Santa face off with the (other) intruders it is epic (and funny) every time.

This film does extremely well in serving up a believable rendition of Father Christmas. A soft lean into Santa’s mythos and backstory gives us a peak at the legendary history of Harbour’s version of Santa. Violent Night acknowledges its own absurdity, especially when it comes to the idea of Christmas magic and its sparkly capabilities. Wirkola serves up a subtle yet definitive origin story for everyone’s favorite holiday mascot, but never asks us to believe in anything stereotypical or cheesy. In fact, Santa’s past is what will incite audiences to root for him throughout this (not at all silent) night. Personally, this was my favorite attribute of the film. It provides a crucial layer of subtext that would later influence his motivations, push audiences to understand him and also give us a kick ass sequence involving a sledge hammer. Harbour deserves nothing but the highest praise for his portrayal as Santa. Audiences will find themselves thinking If Santa really is real, this is definitely what he’d be like in 2022.

The Lightstone family and the party-crashing mercenaries clearly represent this idea Santa alludes to in the first scene of commercialism and greed taking over humanity. Humanity has become increasingly obsessed with money and materials, losing their Christmas spirit and leading them to eventually stop believing in Jolly Ol’ Saint Nick. This has caused Santa’s power to wane over time. The behaviors, dialogue and motives of every Lightstone are all representative of this paradigm of commercialism. The mercenaries also represent greed but on the opposite side of that same coin, some of whom would even kill a child to secure these millions of dollars. Besides its hilariously gory action sequences and Christmas charisma, a biting social commentary on materialism subtly follows us til the end of the film where we are all meant to learn our lesson on what Christmas is really about. 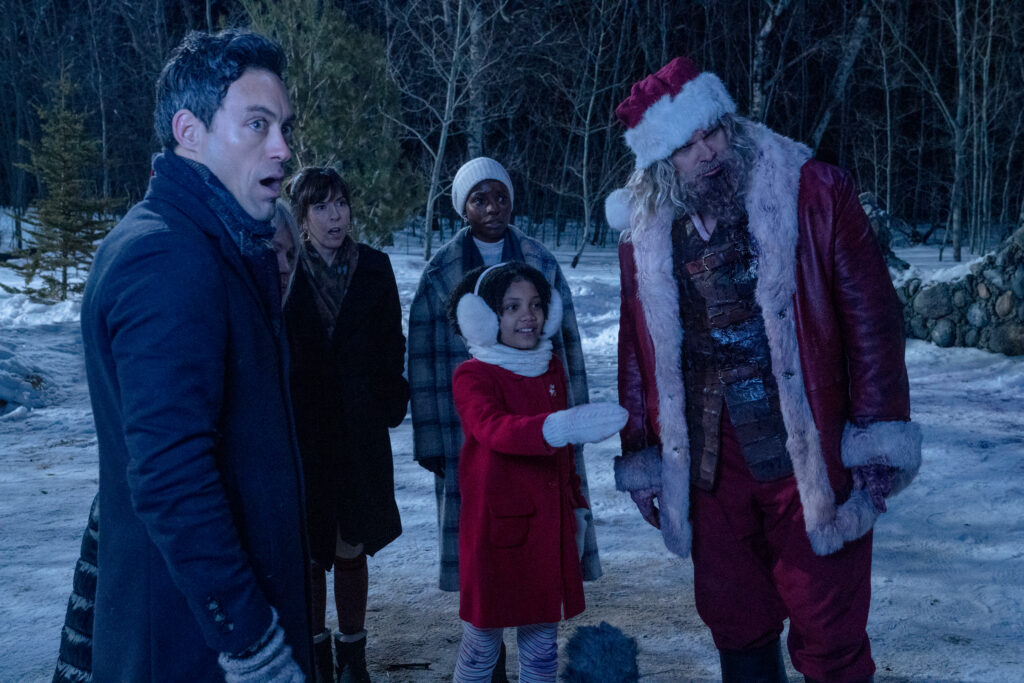 The friendship we watch develop between Trudy and Santa isn’t the only time Violent Night yields to a holiday movie trope, but it perseveres to deliver an earnest, sweet and wholesome duo we can’t help but cheer on. Trudy is kind, joyous and overflowing with hope. This is what lights the dying ember in Santa, whose hope is sparked again by Trudy’s Christmas spirit. Unlike the rest of the world, Trudy doesn’t care for the material; all she wants is for her parents to get back together. She isn’t greedy or corrupted and this is why she acts as the perfect partner for Harbour’s hopeless Santa. Fans of David Harbour, holiday movies and gluttonous gore are eating good this season as this action-packed comedy is more than your run of the mill R-rated Christmas movie. Even without Dasher and Prancer and Dancer and Blitzen, this Santa Claus sleighs.

Watch the trailer for Violent Night below