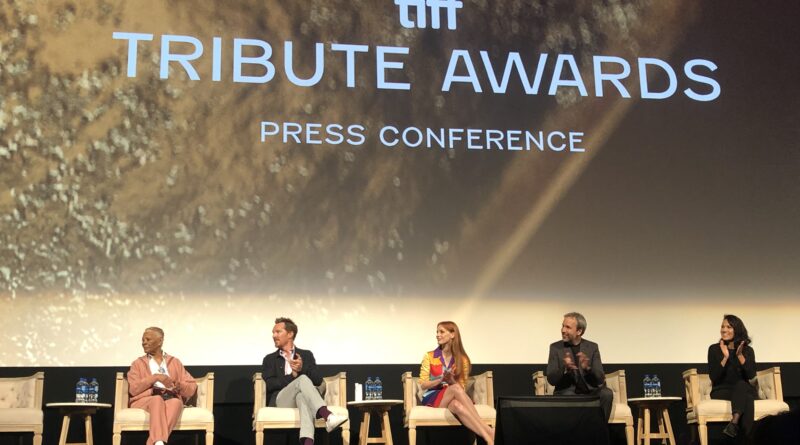 Jessica Chastain speaks on how much anxiety she felt when lockdown all happened but feels amazing to be back with a film she produced and mentions Canada feels like home, because of the number of times she’s been here. She also speaks about her film The Eyes of Tammy Faye and mentions the biggest conception of Tammy Faye was she’s never been convicted of a crime, for her husband’s crime, and people always judged her on her makeup, mascara, and never what she did. She never fully received credit. Chastain also tells us her favourite quarantine film was Moonstruck and she’s watched it a few times during lockdown.

Benedict Cumberbatch speaks on his role in The Power of The Dog, and how he had to go to Bootcamp to really immerse into his character and that Director Jane Campion really helped him with hyper toxic masculinity and it felt like a gift. Cumberbatch mentions how quarantine reminded him of watching outdoor cinemas in Greece and watching Harrison Ford films. One of his favourite films he watched recently was Jojo Rabbit, and he felt hopeful after being back for the festival. He and Chastain both mention that the fan interaction and inclusivity is their favourite part about TIFF.

Dionne Warwick tells us she watched her documentary Dionne Warwick: Don’t Make Me Over by herself and she loved it. Warwick first discovered Netflix during quarantine and she fangirled over Benedict Cumberbatch as she mentions how she binged watched Sherlock Holmes and Lucifer.

Denis Villeneuve speaks on how Dune is specifically made for IMAX and encourages everyone to watch it on IMAX when it releases but he also mentions how he loves streaming and how useful it has become.

Ari Wegner speaks to us about working on the cinematography for The Power of The Dog and how she worked pre-production with Jane Campion for over a year. She mentions how the visual style for the Power of The Dog was so important to create emotion and was inspired by the photography of that time. She tells us that Campion made sure everyone who worked on that film were comfortable and helped them become vulnerable.

Read the full list of awards from the TIFF Tribute Awards below:

Watch the full conference for the TIFF Tribute Awards below!

One thought on “TIFF 2021 Tribute awards”