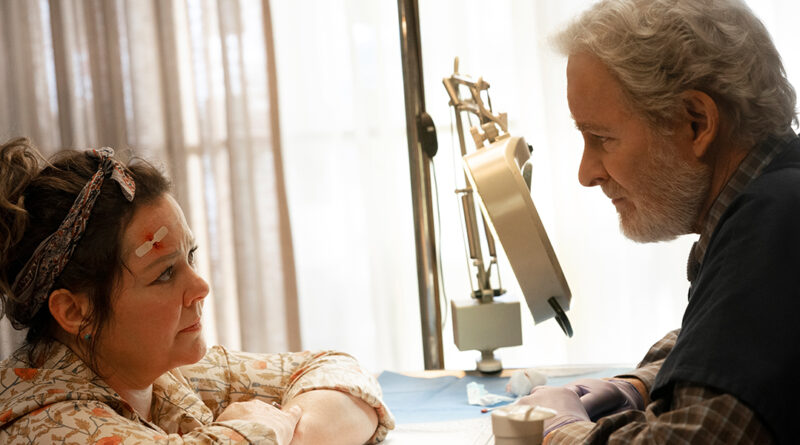 The Starling wasn’t as bad as I thought it would be. The Starling first made its TIFF 2021 debut on September 12.  It’s always refreshing to see two comedians play more serious roles, and they both did a fantastic job at portraying mental health and how serious real-world issues are.

Melissa McCarthy plays Lily, who seems to act like she has it all together and is married to Jack (Chris O’Dowd) who starts off with a warm, loving persona until they have a baby daughter who suddenly dies from Sudden Infant Death Syndrome (SIDS). Fast forward, one year later, Jack ends up in a psychiatric hospital while Lily is working at a local supermarket. Lily visits Jack once a week and ends up meeting his doctor, who refers her to get her own help by seeing a therapist. Lily follows her advice and ends up with Dr. Larry Fine (Kevin Kline) who practices at a small vet. While trying to go through her own stages of grieving she ends up meeting a Sterling and engages in a daily battle where all her anger is thrown out onto the bird.

The storyline was quite boring, but O’Dowd and McCarthy had very raw and emotional performances which really tackle how important personal growth is and how focusing on mental health and finding different ways to heal. They teach us a valuable lesson that it’s okay to ask for help and take the time needed.

I personally am glad it’s on Netflix, not quite worth a theatre watch, but something nice to watch from home.

Netflix releases The Starling on Netlflix on September 24, 2021