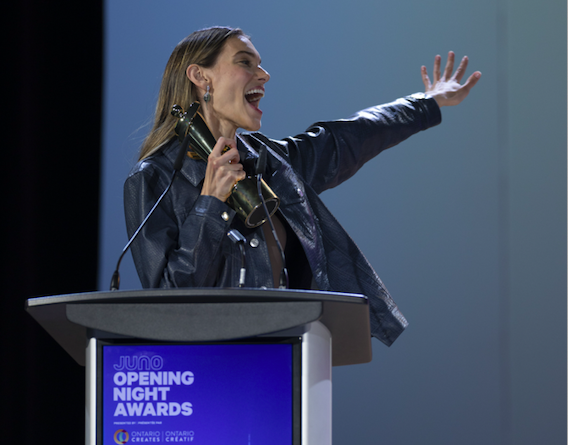 The evening started with Canadian group Valley starting the night with their hit like 1999.

Montreal-based electro-pop artist Charlotte Cardin speaks on how unexpected her big win was and that it is such an honor, especially for a Quebec-based artist , and being able to share her music in English.

Vancouver Comedian Andrea Jin speaks on diversity, and speaks on how her parents reacted and were confused about her career but they’ve been adapting more. She mentions, stand up during a pandemic has been a nightmare, without a crowd. The comedian tried zoom comedy for a while and she mnetioned it was a horrible experience for her, but she’s coming back to live comedy with baby steps.

The youngest winner at only 13 years old, tells us his inspiration comes from his parents. His father is Jamaican, and his mother is of Jamacian descent, so he grew up listneing to reggage and his biggest insipration was Bob Marley.

Canadian country singer Brett Kissel tells us how winning this award means everything to him and he feels accomplished because of how much he loves Massey Hall. He made a vow to himself he would not go to Massey Hall until he plays a show there, and for the first time, Kisell will be playing a show there May 21.

Longtime Canadian singer-songwriter Serena Ryder opens up about mental health. The singer mentions she’s 3 and a half years sober and how it’s changed her life and with her mental wellness.

Multi-JUNO Award Winner, Dallas Green (City and Colour, Alexisonfire) is an acclaimed musician, songwriter, and record producer. MusiCounts is Canada’s music education charity where music education is inclusive, sustainable, and accessible for youth across Canada by providing musical instruments, equipment, and resources. Dallas Green speaks on how he spent Covid thinking and putting everything into songwriting.  Green mentions, that he is standing here today because he was lucky enough to be supported in his passion for music. He loves being able to help MusiCounts and especially for the school he went to, music was not the first on his agenda and his teachers would tell him to think about other things, but he knew his interest was in music, and Green was lucky enough to have that support. Being able to help kids in that way, by putting an instrument in front of them, means everything to him.

The 51st Annual JUNO Awards Broadcast will be live for the first time from outdoor venue Budweiser Stage in Toronto, broadcast and streamed live across Canada at 8 p.m. ET/5 p.m. PT on CBC Gem, CBC Listen, and globally at CBCMusic.ca/junos, and CBC Music’s Facebook, Twitter and YouTube pages.