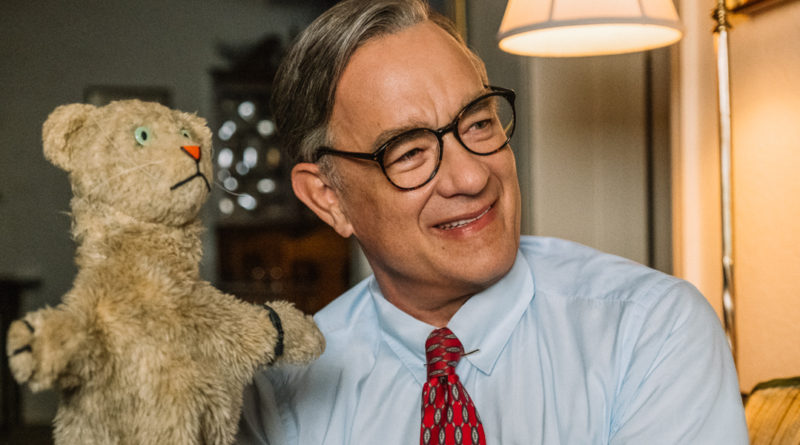 At this stage in his career, Tom Hanks can do no wrong. Granted, he’s always been an incredible talent, but in the last six years, Hanks has really made a name for himself playing legendary American heroes. He’s starred as Captain Richard Phillips, pilot Chesley Sullenberger, journalist Ben Bradlee and even Walt Disney himself. In TIFF 19’s “A Beautiful Day in the Neighborhood” Hanks steps into the iconic red cardigan of beloved television host Fred Rogers, a role sure to land him yet another Oscar nomination. Inspired by a true story, “A Beautiful Day in the Neighborhood” follows journalist Lloyd Vogel who is given the assignment of profiling Rogers for Esquire magazine. In the process, Rogers completely changes Vogel’s outlook on life, enriching it in ways he never dreamed of.

In all honesty, I have never seen an episode of “Mister Rogers Neighborhood.” However, I know how greatly it resonates with anyone who grew up watching Mr. Rogers, so I was excited to learn more about his life and who he was. After sitting in the theatre for almost two hours, I am still none the wiser. “A Beautiful Day in the Neighborhood” succeeds immensely at capturing the tone of the show and Rogers himself, but does little in showing us why Rogers is the man that he is.

Occasionally the movie will touch on details of Rogers’ life, but will then demote Rogers to secondary character status while it focuses more on the frankly, stale storyline of Vogel and his absent father. In a way, I feel cheated. I thought I would be watching a Mr. Rogers biopic, not the story of Lloyd Vogel in which Mr. Rogers shows up from time to time to guide him through short therapy sessions.

This criticism aside, “A Beautiful Day in the Neighborhood” is not a bad movie. You can tell the amount of research, passion and work that director Marielle Heller put into the project. Delightfully optimistic and sunny, it’s sure to satisfy and enchant anyone who grew up in a home where Rogers was constantly on their television screen. There are multiple scenes in the movie that you can tell are there for the enjoyment of Rogers’ hardcore fans, small details and inside jokes that audiences will only get if they’re familiar with the teachings of the famed host.

As Mr. Rogers, Hanks radiates pure joy. Hanks brings Rogers to life with a winning combination of whimsy and depth, delivering a portrayal that you can’t help but be intrigued by. When the movie does shine the spotlight on Rogers, Hanks is perfection. As I mentioned, there isn’t a doubt in my mind that Hanks will be nominated for some type of award for his performance. The man’s talent knows no bounds and as we enter the 2020s, clearly show no signs of waning.

Hanks’s performance is the best part of a movie that while great in terms of actual filmmaking, manages to not be particularly exciting or interesting. Again, I chock it up to the movie’s bizarre decision to focus more on Vogel than the easily more captivating subject in Rogers. Perhaps the overall point of “A Beautiful Day in the Neighborhood” is to show how one extraordinary man had the power to change the lives of everyone he met. If that’s the case, than Heller succeeds with flying colours. Though the actual plot of the movie is somewhat ho-hum, “A Beautiful Day in the Neighborhood” is worth watching for the heartwarming way its messages of love and peace will make your heart soar. Couple that with Hanks’ flawless portrayal and you have two solid reason to see this movie. Go ahead. It’ll make for a beautiful viewing experience.

Sony Pictures releases A Beautiful Day in the Neighborhood on Friday, November 22, 2019