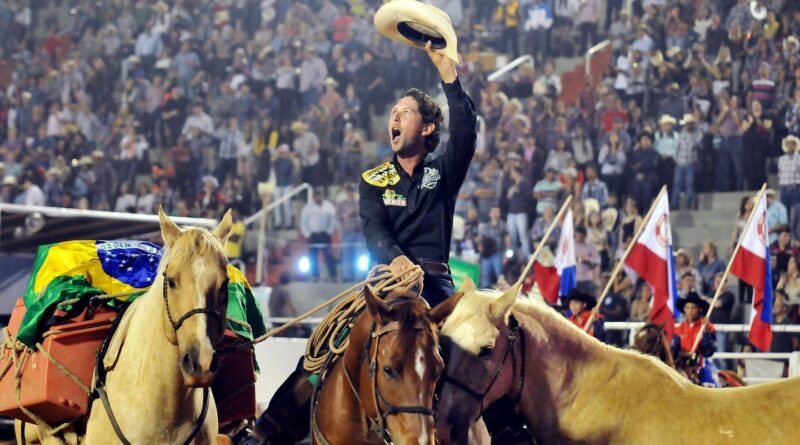 The Long Rider, directed by Sean Cisterna, is a wonderfully inspiring character-driven documentary about Felipe Masette Leite’s odyssey trekking through the Americas on his horses beginning in Calgary, Canada to his hometown in the state of Sao Paulo, Brazil.  Not only is it a “road movie” albeit on horseback, but it’s also a beautiful travelogue capturing the majestic beauty of the Americas but also a “slice-of-life” documentary capturing intimate glimpses of the people he meets on his journey home.

The documentary is captivating and intriguing. Furthermore, it is also a documentary that celebrates the horse and the long rider as shown through Felipe’s deep bond and loving relationship with his horses, and his inspiration for the journey, Aime Tschiffely, a long rider, who journeyed from Argentina to New York in 1925, on his criollos, Mancha and Cato.  As the narrative of his journey begins, so does his deepening connection and bond with his horses. 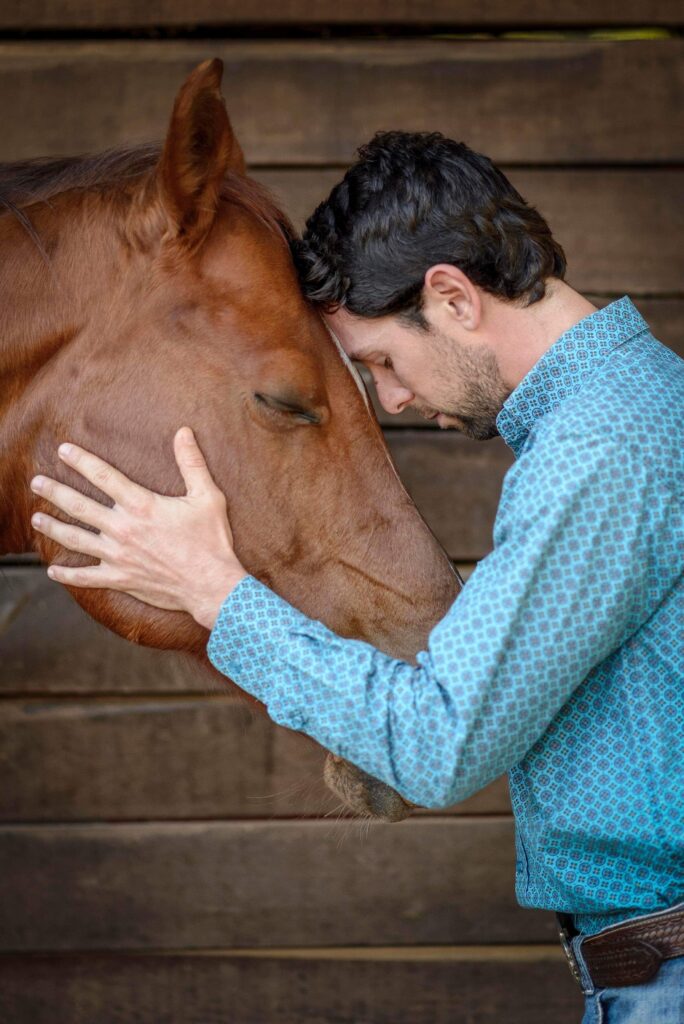 The documentary explores the narrative of Felipe’s life, his backstory, his family’s immigration story to Canada from Brazil and removal from Canada, his move to Canada as a young boy, his motivation, and but more importantly, the film provides a glimpse into the inner workings of a modern-day hero with strengths and weaknesses who thinks outside the box, and pursues his passion to undertake a rigorous and dangerous journey.   The documentary is beautifully crafted employing a variety of film techniques, archival footage, and stills, news footage, recreated scenes from his childhood, first-person interviews including Felipe’s video entries documenting his experiences during his journey, third-person interviews, voice-overs layered over images, and interior and exterior footage shot during the day and night at multiple locations in the Americas that span several years.  The filmmaker has woven together these visual elements to create a compelling and exciting documentary.  He uses interstitial titles, a countdown, i.e. Day 1 Calgary,  to structure the film coupled with geographical maps to document Felipe’s progress across the Americas and journey home.

The Long Rider has many layers and narratives which gives the film much depth and complexity but in a very subtle way it shines a light on the plight of these majestic animals.    When at the US/Mexican border hoping to cross legally with his three horses, Felipe learns that 90,000 horses are shipped annually for slaughter to Mexico, which is shocking to Felipe but to anyone really who loves and cherishes animals, especially horses.   When you consider that Frenchie, Brusier, and Dude are integral to Felipe’s journey, and without them and their abilities including their intelligence, stamina, and sentience, his journey would be impossible to make and accomplish.  The film is a subtle way to raise animal rights issues concerning the horse.  Why would anyone want to eat such a majestic, intelligent, sentient being?  As the film demonstrates, they demand our loyalty and protection, and the slaughtering of horses is a crime against nature.   Let’s stop the slaughter and trade in horse meat!  By the way, horses are not only shipped to Mexico but also to Canada for slaughter while the practice is banned in the US.  It begs the question as to what is happening here. 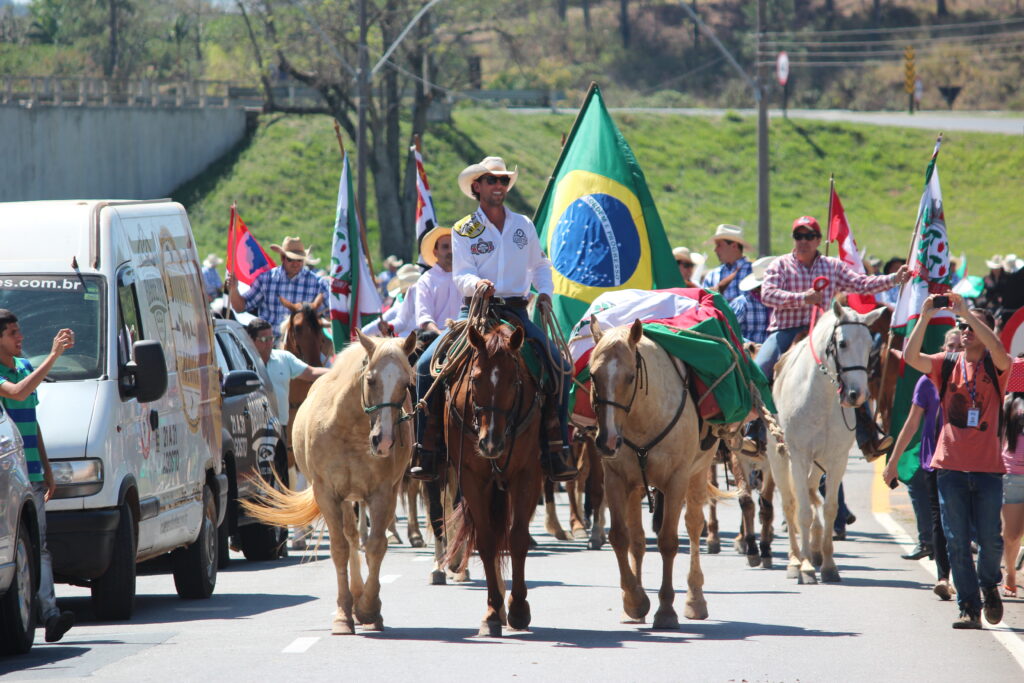 The film includes a lengthy cast of characters beginning with Felipe Masette Leite,  his mother, Claudia Leite, his father, Iso Leite, Emma Brazier, his girlfriend during the journey from Calgary to home town, Cuchullaine O’Reilly, Founder of the Long Rider’s Guild, Stan Walchuk, a long rider, Frenchie, Registered Name, Frenchman’s Tru Angel, Bruiser, Registered Name Going Perry, Sharlee Weasal Head, Blood Tribe, Bernice Red Crow, Blood Tribe Elder, Brian Anderson, Copper Spring Ranch, Sam Morgan of Savery, Texas, Peter Lisker, and the ashes of his cremated sister Naomi Lisker, Nita Rhyne of the Wall of Hope in Texas, Dude, a wild mustang, an unnamed Mexican trafficker, an elderly Mexican female, Mexican charros and thousands of male and female Mexican horse riders who accompanied him during parts of his journey through Mexico, and more.  O’Reilly provides insight and comments about the tactical and political obstacles long riders face and is instrumental in helping Felipe on his journey by connecting him to Stan Walchuk.  And like many long riders, Felipe encounters more than his fair share of obstacles battling the elements, the terrain, accidents involving his horses, bureaucracy, red tape, and relying on smugglers occasionally to get his horses across borders.  In effect, another motif of the film is a man and his horses against nature battling it out to the bittersweet end.  While alone for much of the journey, his parents and girlfriend who are extremely supportive join him on the legs of his journey, as do the wonderful people he meets along the way which warms his heart and soul.

What’s intriguing about the long rider are the obstacles he faces getting his horses legally across borders on his heroic quest to Brazil juxtaposed against how easy the flow of contraband drugs and women are trafficked north with bribes.   Felipe attempts to do things the right way but sometimes the obstacles are onerous and he resorts to unconventional help to achieve his mission.  While capturing Felipe and his family’s fear about him traveling across Mexico, the film shines a light on the reality of Mexicans who work as mules because of the easy money to be had but also the fear and threat of violence ordinary Mexicans face because of the presence of the cartel in their towns. 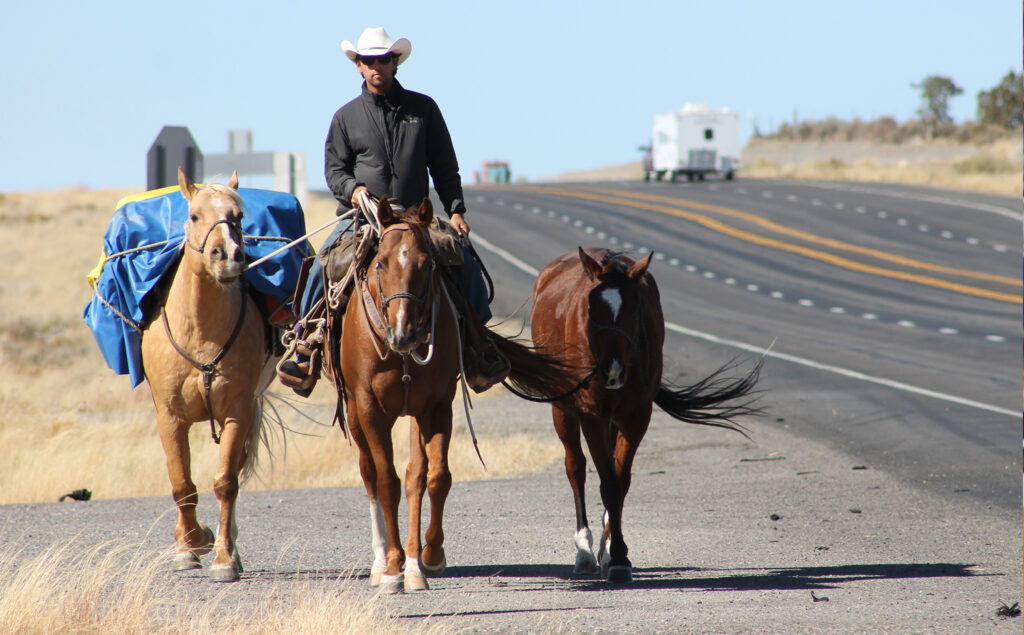 The Long Rider is inspiring and a joy to watch and documents the highs and lows of his epic journey, his fall from Grace, his redemption, and his final journeys from Brazil to Ushuaia, Argentina, to raise funds, and from Alaska to Calgary, and new love, and a new meaning of home.  The film covers a lot of ground and I felt there was enough material for two documentaries as the ending felt somewhat rushed and his subsequent long rides lacked the attention given to his long ride from Calgary to his hometown but alas it is what it is but is still a dynamo of a documentary.  The director has succeeded in creating a poignant and intimate portrait of his protagonist, a humble, nice, young man of simple beginnings who accomplishes his dream despite the odds, who loves his horses deeply and is full of reverence for life and others.  It’s an excellent documentary deserving of your attention.

Check out the trailer for The Long Rider below

Mythic Productions releases The Long Rider in theatres on June 24, 2022